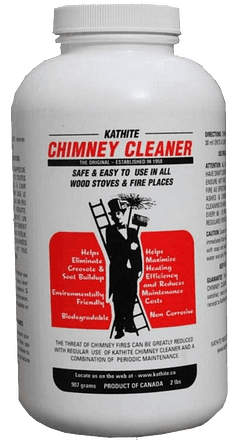 Kathite Chimney Cleaner was developed in the 1950's for industrial and commercial applications. At that time Kathite had manufacturing plants in Ontario and Tonawanda, New York.

During that period, most industry was powered by coal fired boilers. Unfortunately, creosote was a by-product of these systems; regularly clogging the works.  Each boiler required periodic maintenance, which involved powering down the unit, allowing for a cooling time, entering the boiler and scrapping and chipping off the built-up creosote. This practice was both expensive and time consuming.

It was found that adding Kathite Chimney Cleaner throughout the burning process greatly decreased the time involved in cleaning. Not only was the downtime cut in half, but it was noted that the efficiency of the boilers increased as well. Mechanical units were installed to each boiler to add Kathite at periodic times throughout the working day. Downtime and maintenance was reduced to one third of the allotted time.

Over the years, companies switched from coal burning boilers to the more efficient and cost saving oil and gas market. As the manufactures of Kathite Chimney Cleaner saw their market shifting they in turn realized that Kathite would be equally effective for the public sector , for use in wood stoves and fireplaces.

A loyal customer base has been built over the years, as users have found that Kathite Chimney Cleaner greatly decreases the built-up of creosote and soot and easily allows a person to properly maintain their fireplaces cleanly and efficiently.  Combined with periodic sweeping of the chimney approximately every 60 fires, or once yearly, Kathite Chimney Cleaner virtually eliminates the risk of deadly and costly chimney fires.

A HISTORY OF KATHITE CHIMNEY CLEANER