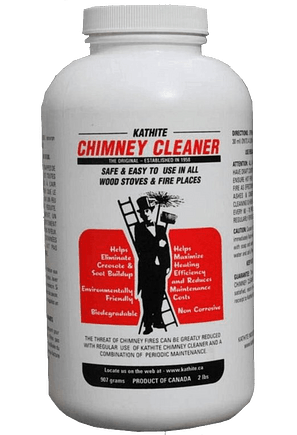 Every year in North America there are tens of thousands of reported chimney fires.  The actual number of chimney fires however is much higher since many fires go unreported; some even go unnoticed.

The fact is that anyone who burns wood in their fireplace or wood stove is faced with the problem of creosote production, regardless of how efficient their heating unit may be.

Creosote is a sticky brown residue that is generated as burning takes place.  When the temperature becomes hot enough to ignite the creosote, it will burn a very intense flame.  This flame will immediately race up the flue generating a very strong up-draft.  A chimney fire will at first sound like a strong wind or low rumble that quickly becomes louder and louder, to the point of a shrieking howl.  This is due to the suction produced by the tremendous up-draft.

The intense flame of a creosote fire will reach temperatures between 2,000 an 3,000 degrees Fahrenheit.  This is hot enough to actually melt the mortar between the bricks.  As mortar drips into the flue, the velocity of the up-draft can shoot the red-hot mortar out of the chimney and onto the roof or surrounding property.  Bricks can also be dislodged.  In addition, wooden framing adjacent to the flue or stove pipe may ignite, causing a more serious fire.

All wood, whether it is softwood or hardwood, green or dry, generates tars, creosote and other incomplete combustion by-products as it burns.  These by-products rise up the chimney and form deposits inside the flue.  The most dangerous of these deposits is the creosote which condenses on the cool surfaces of the flue and then bakes on to form a hard, smooth, “glazed” deposit, layer upon layer.  It is the ignition of these creosote deposits that can cause a chimney fire.

In addition to the fire hazard, creosote is a very corrosive deposit that attacks metals and mortar and can do costly damage to flue pipes and chimneys.  Also, layers of creosote and other deposits will act as a barrier to heat transfer through the flue walls thus reducing the heating efficiency of the system.